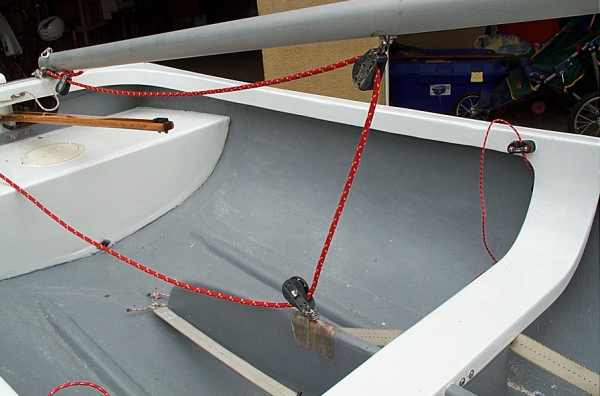 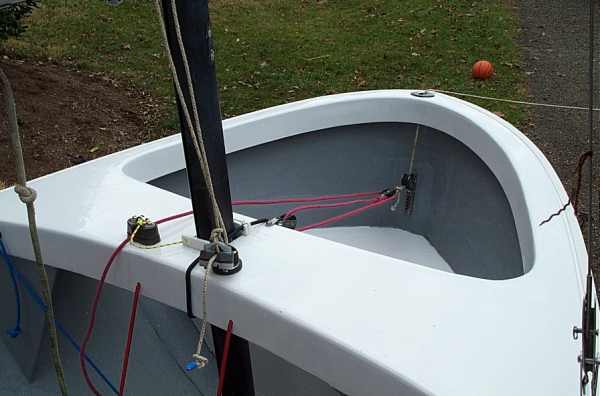 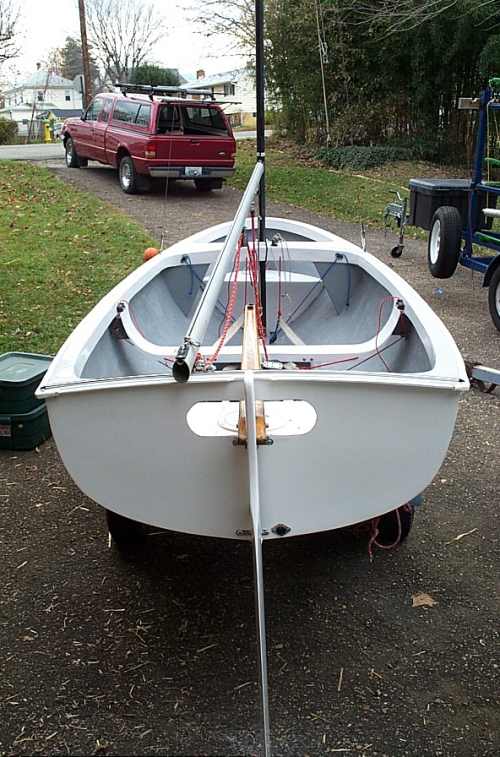 IC 357 (aka “The Pig Boat”) under the scalple! Numbers removed but sticky glue must be treated with ascetone or fiberglass solvent wash. Rub rail is removed. Not pictured are the staples on the deck joint used to secure the deck and hull together while bonding. I’m not sure just how structural these staples are. Lots of gel coat repair still to be done on bottom. The hundreds of gelcoat spiderweb cracks will be left alone. Once painted I’m sure they will eventually reappear, but at least all the dings and bondo should look great for the longterm.

Pile of crap! I bet all this stuff weighs nearly 20 pounds. The rub rail (5 pounds) is on the left. Bow tank stiffeners and particle board (soggy old wood) are on the lower right. Phil actually cut the bow tank open to remove these – they weighed 4 pounds! The white section is the cut-out from the transom (see the next picture). The old brass parts and various hardware are on the upper right. More than a few pounds are saved by putting light-weight gear to replace this stuff. 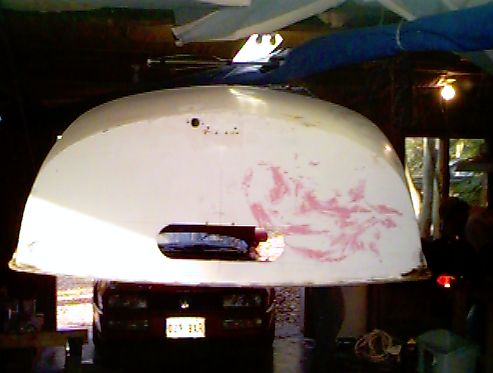 Transom showing the new cut-out. Note the pig – soon to be painted over. Phil removed all the transom hardware, including the drain plug.

Cockpit looking forward. Nice job on the gussets installed last year by Alex Stout – with the infamouse words “this boat is co-owned by Bryan Fishback” – Phil ground out all the heavy gelcoat on the inside and expects to save about 5 pounds. Boat is actually upside-down, suspended from the ceiling as in the first picure which makes it much easier on your back to work in.

Rails are newly boxed! Phil used a cheap closed-cell insulation foam. Don’t use styrafoam – it will melt!! He used 1/2″ hard foam insulation which he bought at 84 lumber. It is easy to cut with razor knife. He did each side with two strips of foam, each about 3 or 4 foot long which went from the center seat to either front and to back of boat. Using a measuring stick he measured at three points inside the rail for width. Glasswork on this old boat meant that width changed over the length of foam. Using the three numbers he marked them on foam and then cut with the blade (straight pieces). Then I jammed them into the rail leaving about 1/2″ lip to lay glass. With this tight fit the glass laid up great without falling into any cracks. The lip was then trimmed using the same blade once the resin hardened. 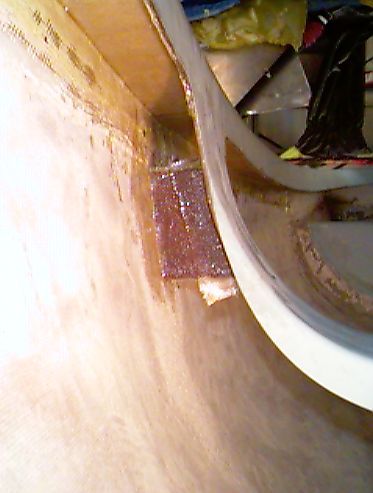 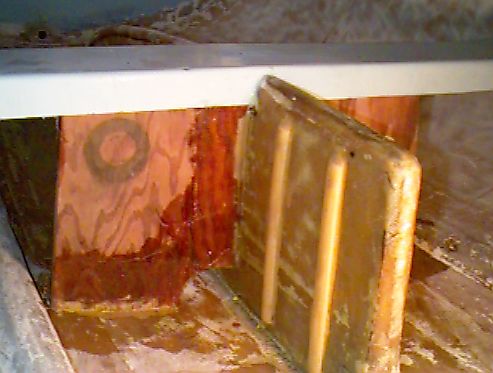 Back of CB trunk and floor. Phil added a layer of glass to both.

Port side of CB trunk. Both sides of the trunk were so flimsy that 30 years of sailing has bowed the trunk out. “My goal was to add thickness to both walls and stringers. The port side is the weakest because it doesn’t have the added 1/4″ reinforcement that the starboard side does for centerboard pivot assembly. I still have more glass to add here because I don’t want it flexing anymore. Once the side walls are strong I need to add shimming to the slot underneath the boat. The problem is that the port side is bowed out about 3/16″ at the middle which needs to be built up somehow. I may do this with filler if the boat can stand the extra weight.”

Partners – Phil cut the partners out with the aft edge at max aft position. He laminated some wood underneath, but still must cut out. This is a good idea to help stiffen this area and provide are for mast compression. 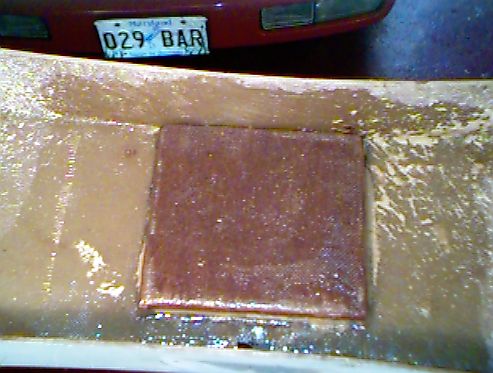 Under side of partner hole – nice glass work.